Traditionally, there has been a large gap between compute performance and storage capability. Increasing data demands have contributed to innovations such as Memory Channel Storage which bypasses traditional storage interfaces and directly presents non-volatile memory (e.g. flash) on the memory subsystem. A very large amount of data capacity is now accessible via the shortest and fastest path possible.

MCS-based products are physically deployed into the same DIMM slots that house DRAM and the first generation of MCS is fully-compatible with the DDR3 protocol. As a result, MCS provides a high-performance persistence layer that is tightly coupled with system memory.

Data now remains local to the CPU and applications, which results in faster, more deterministic response time (a.k.a. latency). 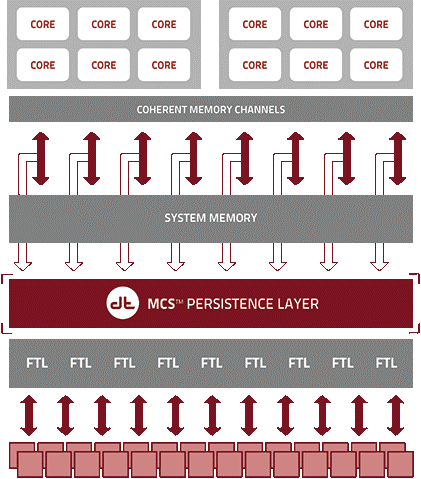